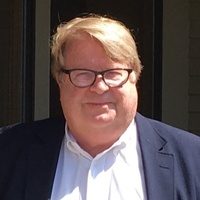 Greg began his career in 1969 with Kenower and MacArthur & Company as an institutional salesman of municipal bonds to most banks in southwest Michigan.  Later he was assigned the state of Minnesota where he called on financial institutions and local brokerage firms there.

During the late 1970s he joined the local Grand Rapids firm of Buys, MacGregor as Institutional Vice President and became President and CEO until the firm was sold to R.W. Baird in late 1988.

In 1991 he started his own firm which merged with Kent King Securities where he served as a Financial Advisor and market maker in regional bank stocks.  After 48 years in the securities business, he has recently joined Mosaic Wealth Management as a Senior Vice President, Investment Planning, rejoining some colleagues from his time at Baird/Buys MacGregor.

Greg is a former member of the Detroit Bond Club, Co-Founder of the Grand Rapids Economic Club, past member of the Peninsular Club and Holland Yacht Club.  In his off-time, he enjoys spending time with his four children, golfing with his colleagues from the University Club and following the race horse circuit, an old passion from his years of breeding race horses.